I have seen a campaign to revise the Philippine Institute of Traditional Alternative Healthcare which was created from the Republic Act 8423 which was signed and approved on the 9th of December 1997. On this act it is declared that:

“It is the policy of the State to improve the quality and delivery of health care services to the Filipino people through the development of traditional and alternative health care and its integration into the national health care delivery system.

It shall also be the policy of the State to seek a legally workable basis by which indigenous societies would own their knowledge of traditional medicine. When such knowledge is used by outsiders, the indigenous societies can require the permitted users to acknowledge its source and can demand a share of any financial return that may come from its authorized commercial use.”

And with this law being implemented, the Philippine Institute of Traditional Alternative Health Care was established. But what do this Institution do?

On the said law, the Institute has mandated to do the following:

(a) To encourage scientific research on and develop traditional and alternative health care systems that have direct impact on public health care;

(b) To promote and advocate the use of traditional, alternative, preventive and curative health care modalities that have been proven safe, effective, cost effective and consistent with government standards on medical practice;

(d) To formulate standards, guidelines and codes of ethical practice appropriate for the practice of traditional and alternative health care as well as in the manufacture, quality control and marketing of different traditional and alternative health care materials, natural and organic products, for approval and adoption by the appropriate government agencies;

(e) To formulate policies for the protection of indigenous and natural health resources and technology from unwarranted exploitation, for approval and adoption by the appropriate government agencies;

(f) To formulate policies to strengthen the role of traditional and alternative health care delivery system; and

(g) To promote traditional and alternative health care in international and national conventions, seminars and meetings in coordination with the Department of Tourism, Duty Free Philippines, Incorporated, Philippine Convention and Visitors Corporation and other tourism-related agencies as well as non-government organizations and local government units.

But what kind of Traditional, Alternative, Preventive and Curative Health Care modalities they are promoting? Let us see on their website that can be found at http://pitahc.gov.ph 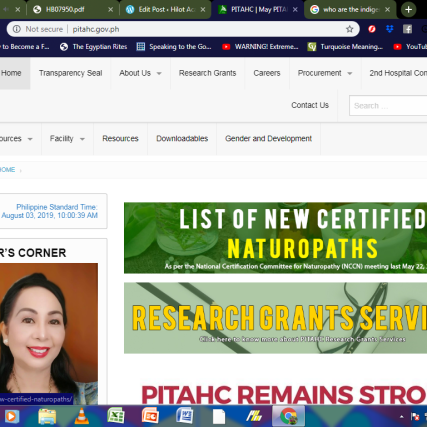 Indeed it is Traditional but not Indigenous to our land. On the new proposed law by the Abono Partylist Representative Hon. Conrado M. Estrella III, he introduced to the Philippine House of Representative 17th Congress the House Bill 7950 which is An Act Empowering The Philippine Institute of Traditional and Complementary Health Care by vesting upon it regulatory powers, providing it with augmented Human resources and upgraded equipment, establishing testing laboratories and field offices, amending certain sections of Republic Act 8423 and appropriating funds thereof.

On this bill it is said that PITAHC will known as PITCHC or Philippine Institute of Traditional and Complementary Health Care instead of Philippine Institute of Traditional and Alternative Health Care; and the Power of Philippine Food and Drug Administration will be vested on the said Institute on top of all of the powers given to it by the law. By giving such power it will also augment its human resources, upgrade equipment, and establishment of testing laboratories and field offices of its own. As it was said on the title of this bill, there is a huge amount of money that will be given to the institute.

But with regards to this, who are covered on this Bill as an amendment to Republic Act 8423? And how do this bill define Traditional Medicine?

Traditional Medicine here is clearly identified by this bill which is:

Whereas the Complementary Medicine on this bill is clearly identified:

But where is Hilot here? On the said bill we found Hilot categorized as Traditional Health Care Modalities.

It seems that the creator of this bill is still unsure of what Hilot is as it caption in small letter “h” as the practice of “hilot”.

So what is bothersome with this bill?

Well aside from the new venue of corruption within the Institution, they are empowered to:

This will be a new Power to be invested to the institute. But unfortunately on the old law which is the RA 8423 they only have to formulate a code of ethics and standards for the practice of traditional and alternative health care modalities for approval and adoption by the appropriate professional and government agencies and other functions. And from 1997 up to the present, they have only formulated standards for foreign modalities such as the practice of Acupuncture, Chiropractic, and Naturopathy in the Philippines though i have to commend Tesda which is an attached agency of Philippine Department of Labor and Employment for creating a Training Standards and Regulation on Hilot Wellness which i also advocated to be revised. But with this new bill, all of these practices will be regulated by PITCHC.

With regards to the practice of Traditional Medicine there is an exemption:

Here your worth must be proven. You must be a tenured Hilot Practitioner and receiving no complain from your patient. But the question is, how the tenured Manghihilot will be recognized when they are uneducated since their knowledge has been handed down without the influence of formal education and training?

Well there are more about this law that we need to be vigilant and on guard. This law will affect us and the preservation of our Philippine Traditional Indigenous Healing Arts and Sciences. Whereas, our teaching here will be branded as Quackery as they have seen us to be on the sidestream as our own Government don’t give recognition to the healing modality that took care of the Health of our Ancestors.

Become part of our September 26 Class and enjoy learning about Non Contact Hilot: Mind and Spirit Work has to offer.

Hilot Academy of Binabaylan is giving out 20% discount on all our Courses if you are a supporting member of Filipino Magick at BuyMeACoffee.Com.

People can support us on a monthly Basis for only USD 5.00 a month or you can pay a whole year of subscription for USD 50.00 only.

So what are you waiting for?

Benefits of becoming our Supporting Member in Filipino Magick

So Become our Supporting Member Now!

Lot 79 Phase A Francisco Ave., Brgy. Francisco Homes Narra, City of San Jose Del Monte, Bulacan, 3023, Philippines
+639952467040
hilotacademy@luntiangaghama.org
Our Physical location is open from Monday to Sundays from 9:00 AM to 5:00 PM and our virtual presence is open 24/7 just reach us out by sending us an email stated above.